Driving a boat is exhilerating! Think Leo and Kate: “I’m the king of the world!” The salty spray of the water, navigating the waves, the bounce of the chop is always a fun adventure. The wildlife that you see is spectacular: playful dolphins, racing batefish, slow, sweet sea turtles, and massive manatees. Did I mention dolphins?

After about two months as a boat owner, my husband told me that I was looking more and more like an “Old Salt.”

Old what? The wife never wants to be “old” anything, but I figured this was a compliment. I have learned that term means “an experienced sailor.” I’ll take that. As a Florida girl, I have been on boats all my life, but we never owned one, so APG has been training me on all-things-boat. And I love it! From readying the dock lines to navigating waters, “old salt” is a name I’ll proudly wear. I have learned a great deal in the last few months as a new boater.

After years of cruising up and down North Florida rivers, enjoying the flats down at St. Marks in Panacea with friends on their boats, and looking at getting a boat, we moved to Destin and decided to finally pull the trigger on buying our own. We had looked at fishing boats, deck boats, and pontoon boats over the years. APG grew up on boats and his family had boats, so he knows what he’s doing. We decided to go with the party barge. We love to entertain and have friends and family around, so that was our primary reason for going with a pontoon.

We’ve had our boat, now, for about 7 months. The best lesson I can tell new boaters or new first mates out there is this: listen to your captain.

It has been years since I handled a boat, and it was so weird driving our boat for the first time. Driving our pontoon is like driving a car in England (the wrong side of the car) in Jamaica (the wildest-driving country I have been to – and I have ridden on the autobahn in Deutschland) or another foreign country with no, or few, road rules. Now, there are rules to driving a boat, but people can be crazy, like some drivers, and ignore the rules. There are no traffic lines on the water, people. Various water craft will zoom up in front of you and cut you off at any given moment. They can be jerks…or ignorant. It’s up to you to know the rules of the water and pay attention at all times. You have to be on. Like surfing or paddle boarding – you’re in the ocean, and the ocean’s unpredictability is the only predictable thing about it.

While coming back into the channel, keep your boat between the channel markers where the channel is the deepest, and remember the phrase, “red, right, return.” Your red channel markers are always on the right when you are coming back in. By default, the green markers are on your left. Conversely, when you’re heading out of the channel, the green markers will be on your right. So, you have to understand the water you’re in. The first time I drove the intracoastal, we were heading from Santa Rosa Island/Okaloosa Island to Destin Harbor and Crab Island. I thought we were heading in because we had originally come from that direction, and I was confused because the red markers were on the wrong side…my left. Actually, we were heading out because the channel to the open ocean is by Destin Harbor. So, it’s good to really know the waters you’re in or have good maps and charts. You need to have the big picture. Thankfully, my hubby knows what he’s doing. I have a great captain and teacher.

You always want to keep to the right, on the side of the channel marker you’re following. People go all wackadoo and cut you off and don’t follow the rules of boating, so you need to pay attention to your surroundings. Sail boats always have right-of-way. You have a motor, yield to the boat under sail. (Some sail boats do have motors, though, but always pay attention.)

Some channel markers may not be up in certain areas. Storms take them out, and if you’re in a less populated area, they might not be up. You may have a green and no red or visa versa. If you don’t see what you think you need, keep with the markers that are present. On the intracoastal near us, there are not always green markers; the bank/dock lines of houses are the obvious barrier and the water is very deep.

Watch out for those shipwrecks! Yes, where we put in on the Chocktawhatchee bay, there are a few boats that lost a fight with a storm or hurricane and have grown so many barnacles they could be the Flying Dutchman, complete with weird, fishy residents. And birds. So, don’t hit ’em. At least they’re visible. Back home in Apalachacola, we’re used to looking out for oyster beds. Those babies will tear up a boat, and they’re not as visible.

A few months back, after a relaxing day on the water, APG suggested I drive the boat onto the trailor. What? Give me my ropes and let me tie off the boat…that’s my job. I was good at it.

Drive the boat onto the trailor? No way.

APG had more confidence in me than I had in myself. Did I mention boating can be great for your marriage? Talk about trust in your spouse. So, I went for it, totally relying on his confidence in me. We had calm waters and we were near our house on the bay – not at the harbor or closer to open water. He was right. (He usually is.) I was ready, and I did it. It wasn’t that difficult, either. Glad I have that skill under my belt.

Those are my few basic tips for other newbie boaters. Anyone else out there who is learning, keep your ears open and take direction, and soon you’ll be an old salt as well!

Right off the Mid-Bay Bridge in Destin, Fl, any vacationer or local resident can be transported to Margaritaville in North Florida: live music, white-quartz sand, blue-green waters, a view of the Choctawhatchee Bay, “shrimp beginnin’ to boil,” and a refreshing cocktail. LuLu’s – where the food and atmosphere are each of an equal standard and do not disappoint: a more-than-satisfied palate, belly, and a family-fun feel with a splash of party. It’s a true southern seafood paradise where Ms. Lucy Buffet’s policy is they stay open until the last customer is ready to go home, whether that’s midnight or later.

In the nine months we’ve lived here, we have heard about LuLu’s and have been meaning to check it out. It has an amazing reputation as an establishment, not to mention that it’s Jimmy Buffet’s sister’s restaurant – Lucy “LuLu” Buffet, so we knew it would be good food and good fun.

At the front of house, there is a gift shop to the left, full of LuLu’s merchandise with a side of all things Florida/tropical – not the cheezy stuff one sees at the standard Florida souvenier shop, but cute paraphanaila one may actually want to purchase – even the Florida local. The hostess counter is dead-center, and the bar is to the right. The restaurant is indoors with a large porch/covered outdoor seating area right on a beach, which has plenty of games and entertainment for kids or kids-at-heart.

The seafood is wonderful, and the smoked tuna dip is the best I’ve ever had. No oysters on the half-shell or snow crab, here, however. It’s more of the southern seafood style: food prepped grilled, blackened, or fried. As a seafood lover, I feel compelled to make that distinction about the menu as I always want oysters steamed or raw (in the appropriate time of year) or snow crab! The kid’s menu is reasonably priced and has a wide array of foods fit for a young palate, including two of my toddler son’s favorites: mac & cheese and grilled cheese. The mac & cheese is homemade and is scrumptious – like what my grandmother made! It is not a boxed store brand, which is always so disappointing to see on a menu.

We had dinner last Saturday night, and we saw boats anchored off the beach. We confirmed with staff that we could drive up in our boat, drop anchor, and come enjoy all LuLu’s has to offer. We have several places we like to go boating, and we always look for a beach or shallow area where we can get Mac out so that he can play. 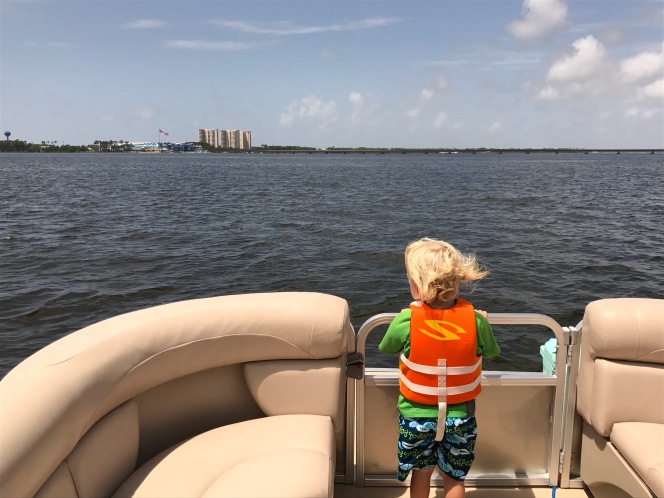 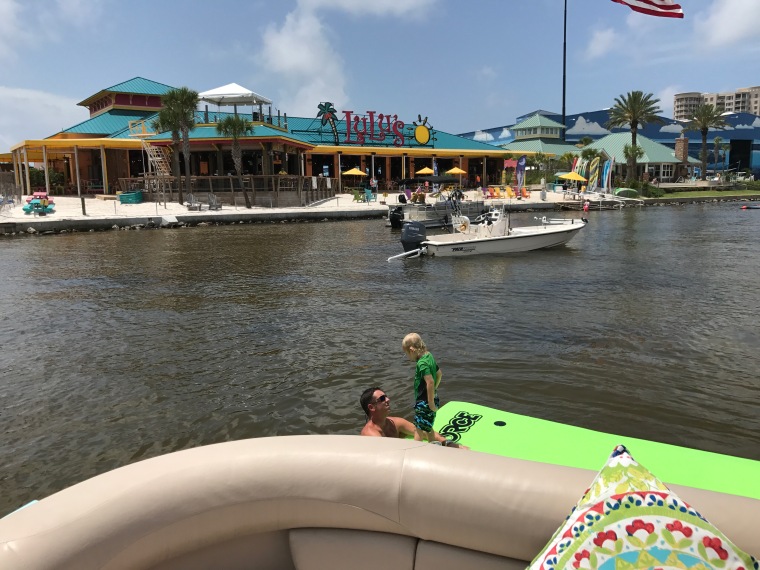 Since season has been in full force, we have avoided going to our normal places when we boat on weekends. We tend to go on shorter trips in the bay to avoid seasonal traffic on 98, and we were thrilled to find that LuLu’s is boat friendly. So, the next day, we went on our “Sunday drive” and took the boat the thirty minutes over to LuLu’s, anchored up, set up the floating island, and played. We went in and got lunch for McCarty, and APG and I split an appetizer. It was the perfect blend of beautiful sunshine, delicious food, refreshing drinks, fun live music (again), and the perfect company on the bay side of Destin.

Ingredients for a Beautiful Life!

Painted Fork is a blog about being creative in the kitchen and eating healthy made easy. Homemade, rustic, natural foods plus a few DIY. Follow along on Instagram!

A wave overcomes everything in its path.

Night Thoughts of a Literary Agent

A daily selection of the best content published on WordPress, collected for you by humans who love to read.

Memoirs of the Quiet

Life of an ordinary mom

The trials, tribulations and elations of a girl surfer

Editor and writer. Interested in tiny things, unhealthy nostalgia, old jungle mixtapes, my little homestead, and my cats. Not to be fed after midnight.

Take Off Your Shoes

Design at Automattic: Be Free

Musings of a female doc chasing the meaning of life.